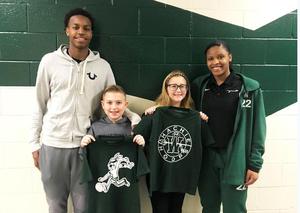 To be in the mix of a Waxahachie High School varsity basketball warm-up is exhilarating in itself. This experience is granted to Waxahachie ISD elementary students to assist with the program needs on game day, and the players get to mentor a new friend.

The smaller kids on the court are better known as the honorary ball boy and ball girl, who have the privilege to get a feel of the game and a chance to interact with student-athletes.

The honorary ball boy and girl help shag balls during warm-up, sit on the bench during the pre-game, participate in National Anthem, shake hands with the players, and present the game ball to referees.

WHS senior AB Shorter assisted with camps in the past and even noticed one of the younger athletes participate as a ball boy in a previous game.

“I think this has a big positive effect on the program," Shorter noted amid basketball practice. "It’s good that they let us do stuff like this. You never know, we might not be able to do this again. They get to cherish the moment they have with us too.”

Shorter grew up in Dallas ISD schools and has two memorable moments with talented athletes. When in fifth grade, he watched the Neal twins play for Dallas Lincoln and had the opportunity to meet them after the game. These are moments he will remember forever.

“They were twins that were top-ranked in the state,” Shorter explained. “And then, Keith Frazier, I had talked to him, but I was in middle school, though, and that was a big deal.”

Shorter flashed back to his younger days and realized he was once in the honorary ball boy/girl shoes.

“Knowing that you have kids looking up to you, you have to work harder," Shorter said before the Mansfield game. "Like with Coach Gober, we look up to him, and he’s got to work harder as a coach — like that concept.”

The two Shackelford students that received this honor were fifth-graders Maisa Ashcraft and Hudson East.

Maisa Ashcraft is not the biggest sports fan, and in fact, it was her first WISD sporting event to attend. Ashcraft usually spends her free time reading and just finished the book “Guts” by Raina Telgemeier.

While in the midst of the girls’ varsity warm-up, Ashcraft thought, “I was just afraid to get hit by the ball. I thought they were going to break the goal.”

Even though sports are not her primary interest, Ashcraft felt extra special to the team and noted that senior Halle Becerra and junior Mya Williams were especially kind to her and definitely made an impression.

Hudson East has played basketball his entire life and was honored to be part of the Runnin’ Indians’ warm-up.

“I was excited and nervous at the same time,” East explained. This was his second game to attend.

“AB made me feel special in a way,” East noted.

Both fifth-grade students agreed they look up to the players who made them feel special.